In the months leading up to the 2008 presidential election, Press Here joined forces with leading youth voting advocacy group Rock the Vote to co-design and produce Rock the Vote’s Road Trip ’08, a non-partisan, state of the art mobile road show targeted towards engaging the youth in key markets and registering them to vote in the upcoming election. The Road Trip bus, designed by Shepard Fairey, traveled to US cities and towns of all sizes, pulling up to college campuses and local happenings to stage high-profile events that featured national and local musicians, politicians, speakers and celebrities including Talib Kweli, Solange, Santogold, Max Kennedy, Hawthorne Heights, Joe Pantoliano, Melinda Doolitle and Ben Taylor.

After four consecutive years of featuring some of the best talent that SXSW has to offer, Press Here’s The Garden Party has become one of the hottest and most talked-about events at SXSW. Set on the gorgeous two-acre grounds of the 19th-century French Legation Museum, The Garden Party has attracted thousands of music industry VIPs, savvy urbanite hipsters, tastemakers and music fans with lineups ranging from established artists such as Thurston Moore, Melissa Auf der Maur, J. Mascis, Okkervil River and Gruff Rhys of Super Furry Animals to prominent up-and-comers like She & Him, Dirty Projectors, Bat for Lashes, Laura Marling and Lavender Diamond. Always promising a full bar, free ice cream and food vendors on-site, The Garden Party is now recognized as *the* event to kick back in the Austin sunshine and watch some of the festival’s most exciting and buzz-worthy bands.

The 19th Annual Tibet House Benefit Concert at Carnegie Hall was a beautiful night of music, culture and poetry that brought together an original line-up of contemporary artists including Patti Smith, Steve Earle, Antibalas, Angelique Kidjo, Keb’ Mo’, Vampire Weekend, The National, Technung and the Lhasa Spirits. Curated by musical director Philip Glass, the event commemorated the Monlam Prayer Festival traditionally held at the time of the Tibetan New Year, drawing vast numbers of monks, citizens and pilgrims from all over the country who gathered to pray for world peace and prosperity. The event was produced by Tibet House US , a non-profit organization founded in 1987 at the behest of His Holiness the Dalai Lama that serves as a center for the preservation and presentation of the endangered Tibetan culture. 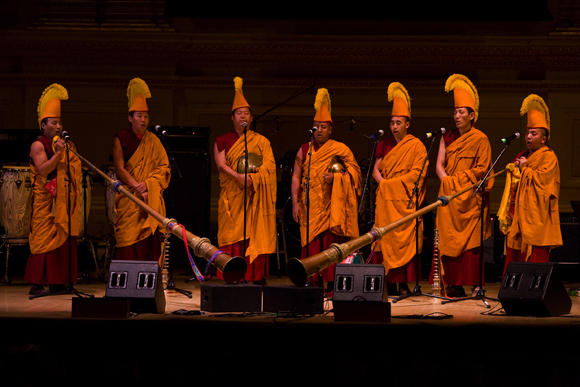 Spurred into creative action by the outcome of the 2004 Presidential election, The Citizens Band's primary goal is to entertain, but always with a sharp jab of the elbow to remind the audience of the state of the world. Hailing from a fantastic Neverland set somewhere between 1918 and 1943, they are an artistic collective with a revolving line-up and boundless creativity. They seek not only to delight the audience with their bawdy fun, but also to creatively ponder on the socio-political and economic issues of our times; all of which is achieved with music, song, dance and elegant aerial ballet. Hailed as "the most exciting act in New York nightlife" by New York City’s entertainment bible Paper Magazine, The Citizens Band have written and performed six original shows in three years, pondering such issues as war, immigration, xenophobia, poverty and their own hopes for political change.